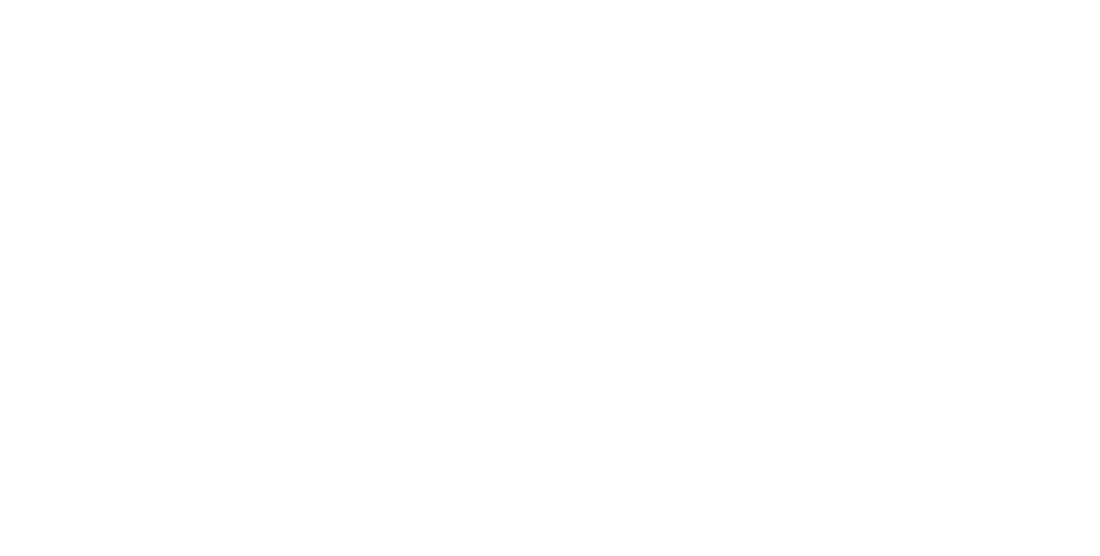 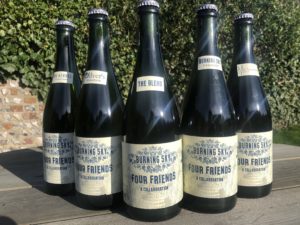 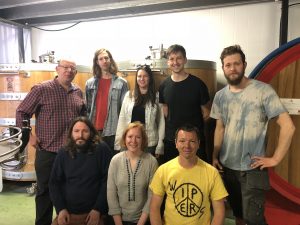 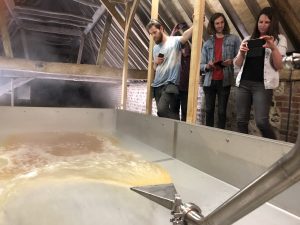 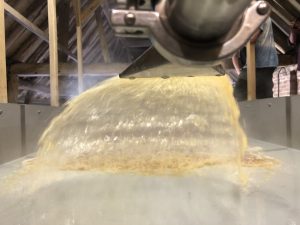 After many months of planning and discussion, four friends (well, actually there were eight of us but we came from four separate fermentation locations), joined together on April 19th 2018.

This collaboration was a meeting of minds, the chance to learn from each other and our wildly different approaches at our respective breweries and cidery.

Without getting too entrenched, the gist was that we all share a love of wild and mixed fermentation beers and low intervention cider – so what would happen if we came together? One brewday – following our turbid mash schedule and extended boil, the wort was sent to our coolship for wild inoculation overnight of beer. The following day it was split 4 ways into 12 oak barrels.

Our unique collaboration project with Oliver’s Cider, The Kernel and Mills Brewing has finally come to fruition. Further down this page, you can find our original post on the brew day but for those more interested in the beer, it’s release is imminent! After a sneak preview and tasting with Mark (Burning Sky), and Evin (The Kernel), at Indyman the beers will be going into trade late November.

There will be an event at The Kernels new tap room on Monday 2nd December (harass them for details), everyone involved will be present with a selection of their beers and ciders. Plus Four Friends The Blend and the single variety iterations will all be on draft, with bottles also available.

You can pre-order bottles from ourselves but note they will not ship until 27th November, when the Blend will ship to national wholesale and bottleshops.

Due to the seriously limited quantities of the single iterations and the logistical impossibility of trying to ensure a fair spread (see below for numbers), The Kernels tap and our online shop are the only places that these will be available.

The beers work as themselves, tasting like a twist on each brewery – the blend being a truly unique beer, impossible to recreate without us four friends. Where will this project go from here? One thing we can say, is that everyone involved is keen to continue it and further our learning from each other – next time we will ensure there is more to go round.

Last Thursday, we started what we believe to be a truly exciting project with friends from Mills Brewing, Olivers Cider and The Kernel, all of whom make exemplary mixed fermentation beers/ natural ciders.

The initial seeds for this project were sown in November 2017 (although thoughts of a similar project go back much further), with an idea starting to germinate in January 2018. Rather than just make a beer together, the project is that we brew a beer – then everyone has a portion to which they add their own specific mixed fermentation culture to.
Last week we received barrels from those involved in preparation for the brew day. Tom Oliver’s barrel selection is especially interesting, as the barrels all contain the cider lees from 3 different varieties and vintages –
Thursday 19th April sees Tom (Oliver’s Cider), Jonny and Gen (Mills Brewing), Tanya and Ben (The Kernel), arrive at the brewery to kick proceedings off. We had previously decided on a grain bill of Pilsner malt, flaked wheat, unmalted wheat and torrefied oats. A turbid mash schedule was chosen – this will give the yeasts complex sugars to eat over a lengthy fermentation.
As the resulting gummy wort collected in the copper, we added aged hops – these will give little aroma or bitterness, instead the antiseptic qualities are what we want to help preserve the wort on it’s long journey ahead. After an extended boil, the hot wort was sent over to our coolship for initial innoculation over night. Although we have had an unprecedented spike in temperatures this week, the barn in which we house the coolship is north facing, so it never gets the sun. Temperatures at night are still dropping to 8 degrees celsius added to which the cool sea breeze whistles up the gap in the South Downs, through the vents giving us a wort temperature the next morning of 21 degrees celsius.
The beer was then transferred to a holding tank overnight to give a good mix prior to being dropped into everyone’s barrels. The barrels have been dosed with the respective mixed cultures, so the waiting game is now on. It’s going to be  a fascinating journey as we see how the beer develops and the differences between the different cultures and barrels. When we are happy with the results, everyone will reconvene for a tasting and blending session. The plan at the moment is to bottle small amounts of ‘mono-blend’ of each brewery’s iteration – this will highlight the different flavours achieved, with the bulk of it blended.
When will it be ready? Only time will tell.

This website uses cookies to improve your experience while you navigate through the website. Out of these cookies, the cookies that are categorized as necessary are stored on your browser as they are essential for the working of basic functionalities of the website. We also use third-party cookies that help us analyze and understand how you use this website. These cookies will be stored in your browser only with your consent. You also have the option to opt-out of these cookies. But opting out of some of these cookies may have an effect on your browsing experience.
Necessary Always Enabled
Necessary cookies are absolutely essential for the website to function properly. This category only includes cookies that ensures basic functionalities and security features of the website. These cookies do not store any personal information.
Non-necessary
Any cookies that may not be particularly necessary for the website to function and is used specifically to collect user personal data via analytics, ads, other embedded contents are termed as non-necessary cookies. It is mandatory to procure user consent prior to running these cookies on your website.
SAVE & ACCEPT

It is an offence to sell alcohol to anyone under the age of 18 in the UK.

In order to place an order with us you must tick the box below to confirm that you are aged 18 or over. 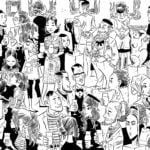 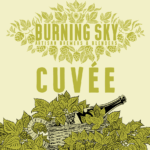